I would like to share a project that I had the chance to work on last week. I was invited to participate in the Olympus Games, this is an event that is organized by one of our partners: Olympus-Controls. Every year, they organize an automation competition using the various products that they carry. This year, 7 teams participated in the games, each team was made up of about 5-6 people. Each team included sales engineers, application engineers, design engineers and a person from one of their suppliers. Our team included me, Marques Rasmussen, Jordan Schwarz, Drew Whaley, Jason Brickner and Andy Monteith. Our only restrictions were: using Universal Robots, Robotiq products, a Safety Scanner and 48 hours to complete the project.

We decided to use the UR10 to be the dealer in a game of BlackJack. We also used a Robotiq 2F85 gripper with modified fingertips to manipulate the cards and the FT300 sensor for path recording and to use in a force feedback loop. We also used a DataLogic camera and vision system to take a picture of each card being dealt to keep count of each of the player's scores. We integrated the SICK Scanner on the BlackJack table to decrease the force threshold needed to stop the robot (Reduced Mode) when the robot was close to the players. We included a few buttons and lights to make the game more interactive and fun to play. After 48 hours of setting up the BlackJack table and programming the robot and the vision system, the final product looked like this: 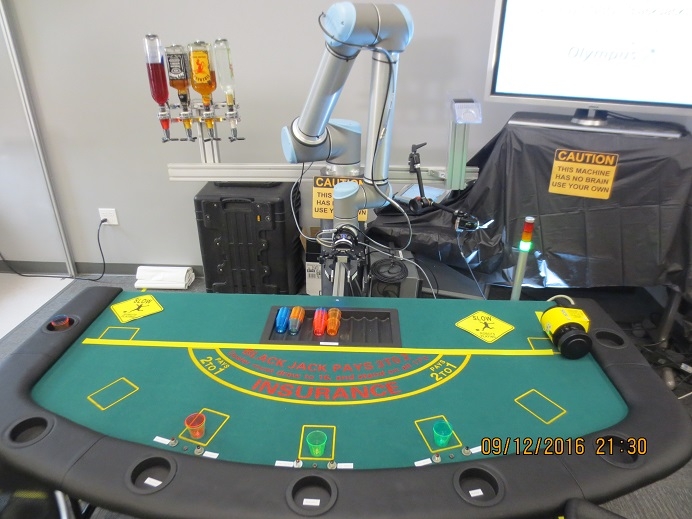 The logic of the program:
Here is a time-lapse video that shows an accelerated version of the game being played: 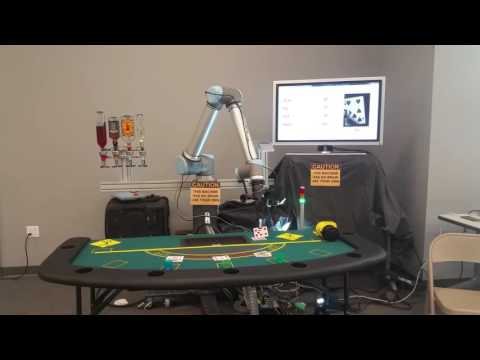