We did an application demo using Robotiq's products and a 3D Laser Scanner from Creaform.  The purpose of this application demo was to demonstrate how easy it is to perform a 3D inspection of a plastic part using the whole combined solution of Robotiq, UR and Creaform.

Our goal was to simulate an offline inspection of a plastic part while the production moves on a conveyor. On many production lines, sample parts are removed to be inspected on costly CMM's and they become a bottleneck needing to be operated. The robot would remove a sample part from the production line and inspect it close to it. The 3D scanner being much faster than a CMM to inspect 3D shape inspection proved to be a good option to speed up the process.

We've mounted on a UR5, the Robotiq 2F85 Gripper, the Wrist Camera as well as the FT300. On the scanner side, we've used their HandySCAN3D 700 held by a specific bracket and connected via a specific I/O module & software to ensure communication with the UR controller.

The HandySCAN3D is normally meant to be used as a handheld device. Once activated, 7 laser lines are projected on the part and captured by two cameras. Creaform software VXelement than converts the data to an .STL file that will be compared to a CAD model for inspection purposes.

The customer's goal was to have the robot grab a part on a production conveyor line and bring it to an inspection area in order to qualify the part and extract some measures like a ''Go No Go'' qualification.

We've used the Wrist Camera to recognize the part on the conveyor and the gripper to grab the part to the inspection where the scanner would do his qualifying job. Since the scanner must be moved at a certain distance normal to the surface, it would have been hard and time-consuming to teach those scanning displacements by waypoint because of the organic shape of the part.

We've used the path recording function in Robotiq URcap and it was pretty intuitive grabbing the 3D scanner and capturing part geometry like using the device as a handheld device. 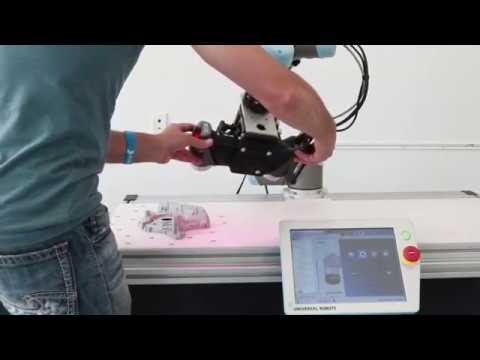 See the final results of the complete process here: 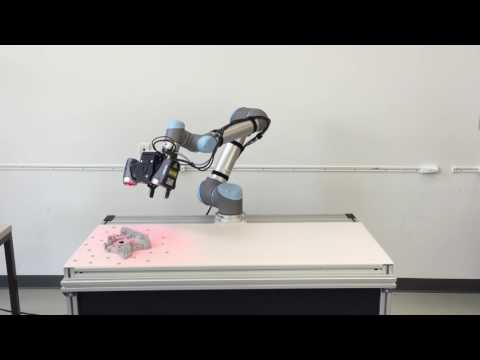 Did you have such requests from customers who wished for a simple solution for inspecting theirs part without investing in a costly CMM machine?

How did you manage it?
Tagged:
2 · TwitterFacebook