Sebastien Posts: 219 Handy
September 2016 edited November 2016 in Programming
Hi Pros,
we have been working on a paint application where you need precise start and stop positions of a painting application. The paint gun is triggered using a pneumatic 24VDC valve. On Fanuc robot you are allowed to add a motion line that can trigger a digital IO within the motion line. So as the robot starts moving the gun would start. This option is not available on UR Robots. There are probably a couple ways of doing this. First I thought of triggering the IO for the gun just before the motion line but I was afraid it would create a little spill of paint at the beginning. So I tried to find a way to trigger the paint gun as the robot starts moving. So what I did, is that I used a thread that would monitor the value returned by the script function is_steady(). Then based on whether I am in the paint motion or not I would trigger the valve. Because of the infinite loop error that I had when I tried to run the program, I had to add a wait command in the thread but I kept it very slow. Since the thread is looping at 0.008s I believe that there will be some inconsistencies in the paint start and stop positions that will depend on the actual robot speed. This is the way I thought of doing it. Do you guys have any suggestions?
Here is the code and video. In the video you see a green light on the valve when it is being actuated. More tests on this to come! 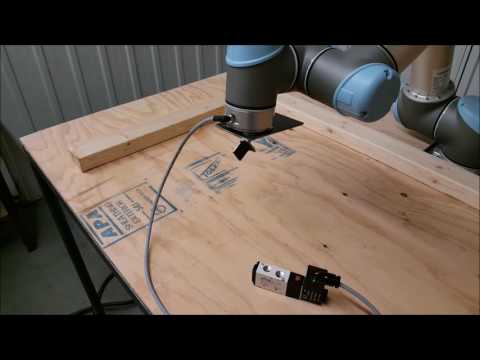