Catherine_Bernier Posts: 144 Handy
July 2016 edited July 2016 in Programming
So even though the new Robotiq Camera is now available for simple pick and place applications, there are other ways, with its basic functionalities, to do various tasks with it.

In this post, I wanted to demonstrate how you can use the Camera to do inspection tasks such as  detecting the presence of a part or an element in your workstation and choose a specific action in the 2 cases (part is present or not).

Here is the program tree of this demonstration: 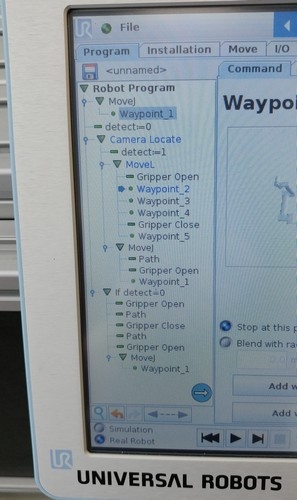 So the logic is to assign a variable "detect=0" at the beginning of the program. Then, the Camera Locate acts like a "if" node so if it detects the part teached, the robot will read what's inside the node. So you need to add the variable" detect=1" inside so the other part of the program, which is what to do if the part is not detect,  don't get read.

This way you can program and action if the part is detect and if not, you have the other part of the program which says: "If detect=0"...

Please note that inside your Camera Locate node, the first moveL is relative to the position of the part and you need another moveJ to complete your action relative to the workstation. (Explained in the manual soon released)

Here is the result in a video:

Many applications can use this feature such as filling a feeder with parts once it is empty, do a quality check and add the missing part on an assembly...

Any other ideas on how to use this programming?
Catherine Bernier, Jr. Eng.
Application Engineer at Robotiq
[email protected]
https://www.linkedin.com/in/catherinebernier
program inspection camera.jpg 37.8K
Tagged:
3 · TwitterFacebook