In our holiday video this year, we feature Santa Claus and his wish list to produce all the presents he needs for the children, without any injured elves!

Thanks to Santa Claus’s interest for automation and to the help he got from the DoF community, the robots saved the holiday spirit and worked with the elves in the factory to deliver all the toys on time to the children. Take a look! 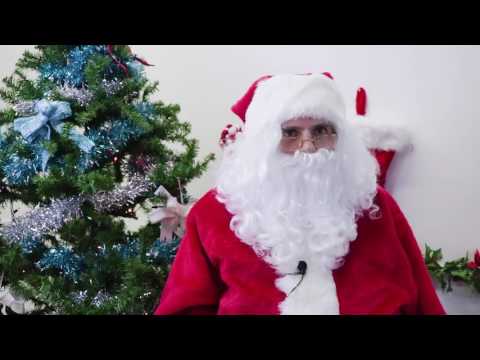 As you saw in the video, we used the robot in 5 simple and funny scenes. We wanted to share with you the robot programs (see in attachment) and our workarounds.

First, we assembled Mr. Potato using our 2-Finger Gripper and Force Torque Sensor. Here we used a path recording to program the movement. It was definitely a challenge keeping Mr. Potato in place so we had no choice but to glue the poor him on the table to keep him stable. 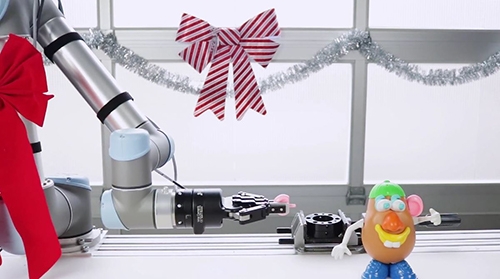 Then we placed the ribbon bow on the gift. Here we simply used the Gripper to grasp the bow and placed it on top of the gift. The bow was of course crushed by the end of our several attempts in placing it perfectly on the gift. 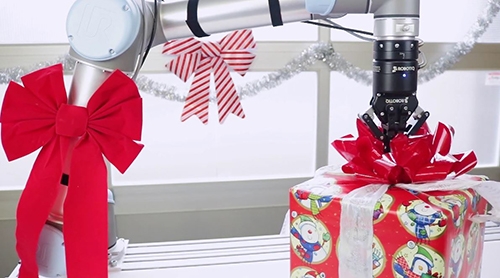 In another scene, we placed a gift in Santa Claus’s bag with our 2-Finger Gripper and Force Torque Sensor. We used the Gripper to grasp the box and since the bag was opened at an angle and there was already a gift in the bag, we used the FT300 sensor's path recording feature to insert the small gift into it. This made it really easy to place the gift without hitting into the box that was already there. 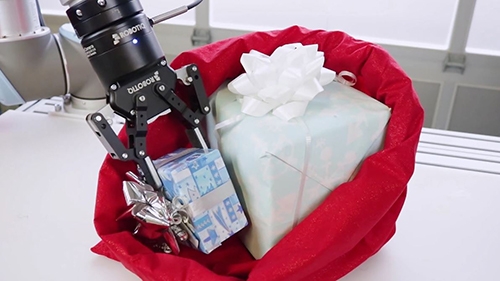 The cheers with the DoF beer was for sure a highlight for us all. We used the path recording feature to program the move. We had @Fanny_Borgeat hiding in the back pressing play for the robot to move, however, it took us several attempts before the elves and Santa Claus to be in sync with the robot. 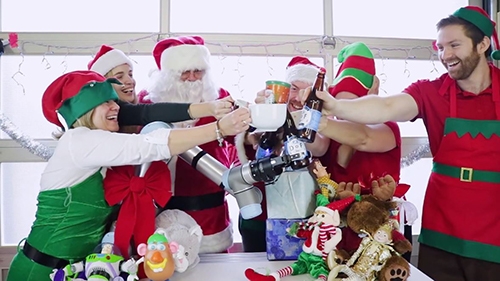 At last, our robot closed the show by writing “Happy Holidays” using a long exposure picture. To do this, we printed "Happy Holidays" on a large piece of paper. We put this message face down on the table near the robot and closed the Gripper on a 3D printed tool shaped like a pen. We turned on the FT300 sensor using the "Plane" setting in the ActiveDrive Toolbar. Then we guided the 3D printed tool along the first part of the message ("Happy") in the first path recording node. We then recorded the "Holidays" in a second path recording node. We clicked on the "Constant Speed" option and "Relative Path" option for both path recording. Then we inserted a waypoint above both path recording nodes, placed the robot's tool in front of the camera and clicked on the 90°. 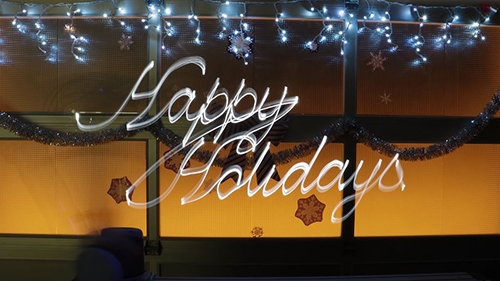 We hope you enjoyed the video as much as we did filming it and that it puts you in the holiday spirit!

Now that Santa Claus got his wish list completed this year around, what about your robotics wish list? What would you like to see improve? To achieve in your factory? Which challenges are you looking to overcome?

Tell us in this short survey and help nurture future roboticists!

FIRST Robotics' mission is to inspire young people to pursue further studies and careers in the field of science, technology and engineering. Their vision is of a world which celebrates success in science, technology and engineering and in which young people dream of becoming science and technology heroes. FIRST Robotics pursue their mission primarily through running robotics competitions for school-age students at the elementary, junior high school and senior high school level.

On a last note, happy holidays from the DoF crew and please remember that our team will be reducing its hours during the holidays. As a result, it will be longer to respond to questions.
Amanda Lee
DoF Community Manager
[email protected]
cheers.urp 1.8K
Bow_Ribbon.urp 3.2K
mpotato.urp 2.5K
present_bag.urp 3.5K
happy_holidays.urp 20.3K
Tagged:
7 · TwitterFacebook