mikebeauchemin Vacuum Beta tester Posts: 23 Crew
October 2016 edited October 2016 in Applications
We have been asked by some clients how to offset the path trajectory once it has been taught. When using path recording it is always easier to rest against a certain surface as you move the robot along the path that you are recording. Then you would need to offset the tool/path after the recording process such that when you hit play, the robot is offset by a certain distance from the surface that you were pressing against during the teaching process. Some clients use a dummy tool that they place on the robot glue dispensing tool to compensate for the height during teaching. However, there is an easier way to do this as shown in the video below. First, insert a waypoint that we would consider the reference position for the path. Then record the path while having the robot rest against the surface as you move it along the desired path. Once the path has been recorded, select RELATIVE PATH option in the path recording interface, move the robot to the reference waypoint that is the node before the path and offset the position by the desired amount in the correct axis and that’s it. Since the path is recorded relative to this waypoint, it will be shifted in the same direction by the same amount. In our video we offset the tool in the Z direction of the base by 5 mm. 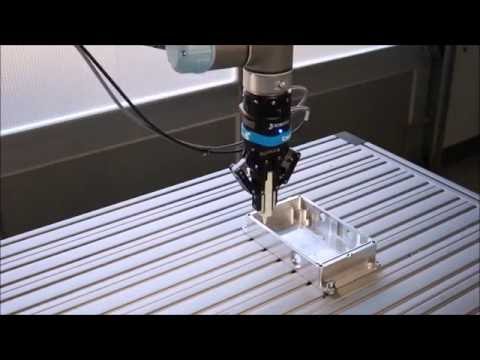